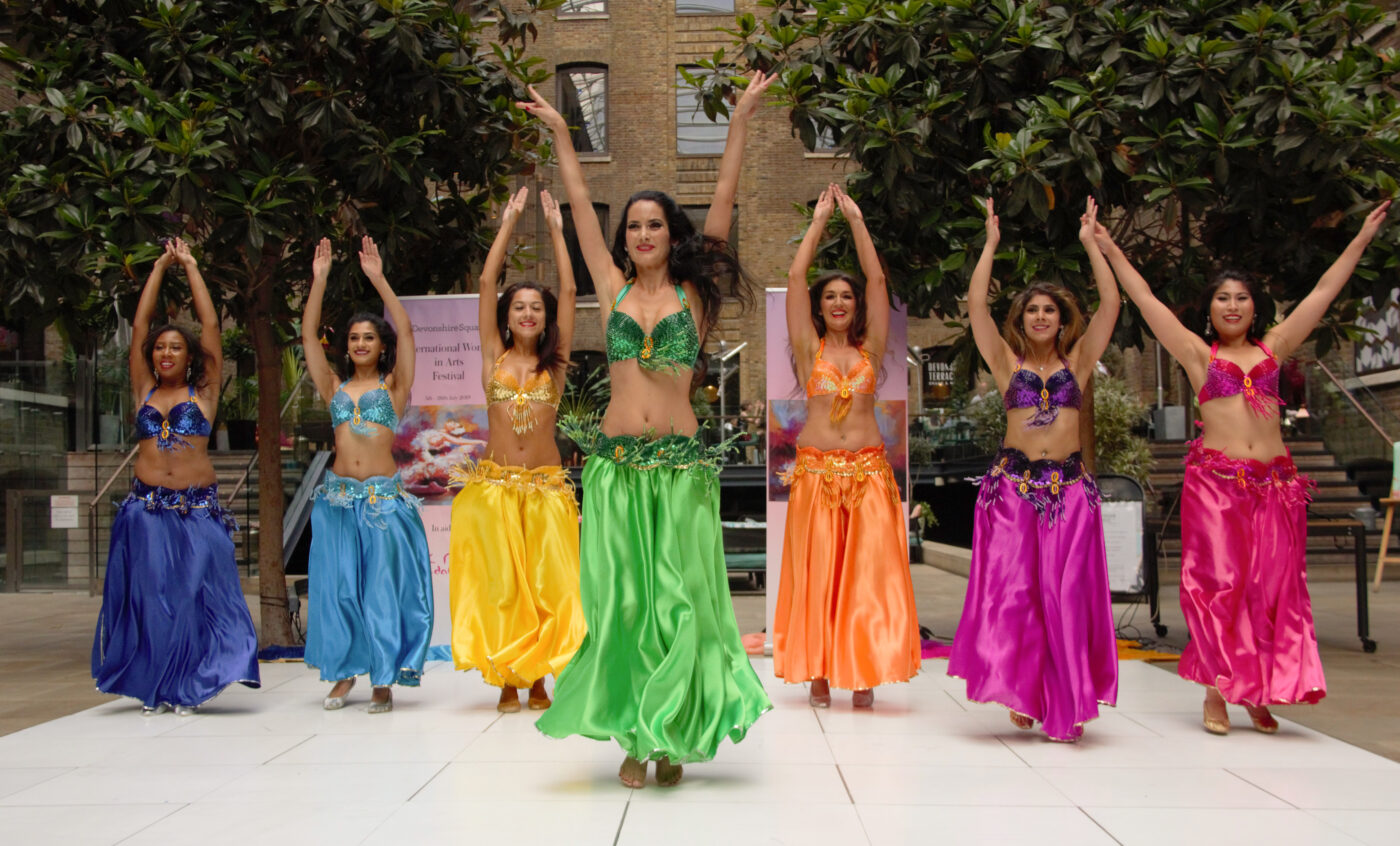 From 5th to 26th July, Devonshire Square will be hosting “The International Women in Arts Festival”, a 4-week programme of FREE attendance, world class artistic performances organised by Devonshire Square Events Team to celebrate the achievements of women in the arts, both as performers and as educators, while raising awareness and funds in aid of The Pink Ribbon Foundation.

The programme includes music performances by all female bands specialising in different music genres varying from Jazz to Swing, including classical and pop, executed by highly accomplished musicians and teachers. The festival will showcase an array of dance shows performed by both professional dancers and students from some of the most successful dance schools and creative companies in London, all founded by women who have transferred their passion, skills and cultural heritage to their students, becoming valuable ambassadors of their home countries, promoting cultural interchange, diversity and significantly contributing to the artistic education of women and their wellbeing.

The Festival will also see the highly anticipated participation of a duo of Olympic Rhythmic Gymnasts from Team GB, accompanied by an all-girls acrobatic troupe, who will present a synchronised ribbon choreography combined with mesmerising, extreme flexibility gymnastics, throws, catches and power tumbling.

On the Festival’s opening day, attendees will have the chance to have their portraits sketched live by international figurative & fashion illustrator Katharine Asher, the talented artist whose projects include collaborations with Swarovski, Bulgari, Louis Vuitton and Cartier.

All performances will take place at 1pm in the atmospheric setting of Devonshire Square’s Western Courtyard and they are open to everyone.

The Devonshire Square community will be fundraising in aid of The Pink Ribbon Foundation during the whole duration of the festival. Collection boxes will be available at the ground floor reception desks of all Devonshire Square’s buildings, from 8am to 5.30pm, as well as in the Western Courtyard, while the shows will be taking place, from 1pm to 2.30pm. Donations can also be made on line through the following link:  http://www.pinkribbonfoundation.org.uk/make-a-donation/

Middle Eastern dance show choreographed and presented by professional belly dancer and dance-school founder Fleur Estelle, executed by a troupe of professional Oriental dancers and students from Fleur Estelle Belly Dance School. Fleur is a holistic belly dancer, teacher and choreographer who has performed both in the UK and overseas for international royalties, celebrities, TV shows, and most recently as a dancer in Disney’s 2019 live-action Aladdin movie, starring Will Smith.

Latin dance queen Gladys Cavalcante, highly accomplished choreographer and performer from Rio de Janeiro, will present an entrancing Samba and Salsa show accompanied by her dancing partner Giovanni Ferrari. Gladys trained at the Jaime Arôxa Dance School, the most traditional Brazilian Ballroom Dance School and has performed and taught Latin dance world-wide. She reached the semi-finals of Britain’s Got Talent 2010 and shared the prize for the Best Latin Dance Performers (with Douglas Gomes, one of her dance partners) at the Latin UK Awards (LUKAS) in 2011.

Sacred Rejang Sari dance and traditional Legong Kuntul dance by Lila Bhawa, UK’s leading Indonesian dance group, presented and executed by Lila Bhawa’s Artistic Director Ni Madé Pujawati and professional Javanese and Balinese dancer Andrea Rutkowski. Lila Bhawa have performed in some of the most prestigious venues and festivals both in UK and internationally. They were recently invited to perform at the Cadogan Hall during the official celebrations organised by the Indonesian embassy to mark the 70th anniversary of Indonesia-UK Diplomatic Relations.

A duo of Olympic Rhythm Gymnasts from Team GB will show exceptional level of rhythm gymnastics, including ribbon choreography combined with synchronised throws, catches, tumbling and extreme flexibility. The gymnasts’ routines will be followed by a high-energy display of ground-based acrobatics, including high trio balances and hand to hand acrobatics executed by an all-female acrobatic trio.

All female quartet, London based Velvet Strings will present an extensive repertoire that will include some of the most beautiful classical and Pop songs, ranging from Mozart to The Beatles, including hits from Beyoncé, Ed Sheeran and pieces by Ennio Morricone. The Velvet strings have performed throughout the world in both classical and pop settings, including The Royal Albert Hall, Buckingham Palace and The Globe Theatre. Their Screen performances have included numerous music videos plus appearances on shows such as X-Factor, Strictly Come Dancing, RTTV, SBTV, and BBC Radio 1’s Live Lounge.

Awe-inspiring Syndicate du Swing band,  fronted by three highly talented female vocalists, will present a range of traditional swing songs alongside some contemporary classics in a vintage/swing style from artists such as Paolo Nutini, Scissor Sisters, Jessie J and many more.

Featuring some of London’s most well-known and respected jazz musicians, all-female jazz band All That Jazz will present a stunning repertoire that will include classical Jazz-hits by Frank Sinatra, Duke Ellington, Ray Charles, Peggy Lee and many more.

This website uses cookies to improve your experience while you navigate through the website. Out of these, the cookies that are categorized as necessary are stored on your browser as they are essential for the working of basic functionalities of the website. We also use third-party cookies that help us analyze and understand how you use this website. These cookies will be stored in your browser only with your consent. You also have the option to opt-out of these cookies. But opting out of some of these cookies may affect your browsing experience.
Necessary Always Enabled
Necessary cookies are absolutely essential for the website to function properly. These cookies ensure basic functionalities and security features of the website, anonymously.
Functional
Functional cookies help to perform certain functionalities like sharing the content of the website on social media platforms, collect feedbacks, and other third-party features.
Analytics
Analytical cookies are used to understand how visitors interact with the website. These cookies help provide information on metrics the number of visitors, bounce rate, traffic source, etc.
Advertisement
Advertisement cookies are used to provide visitors with relevant ads and marketing campaigns. These cookies track visitors across websites and collect information to provide customized ads.
SAVE & ACCEPT